We celebrate the European Day of Languages every 26th of September in my Spanish lessons. EDL is like your wedding, you need to plan it well ahead!
3 months before the EDL:Find an eTwinning project!
Register on the eTwinning website right now, and sign up for an EDL Project. Last year, we participated in one where we had to send cards to other countries in Europe saying Happy European Day of Languages in our native languages. We made the cards in our first two Spanish lessons in September, they were 10 minute activities at the end. We received cards from all over Europe, we loved reading them and finding the countries on the Internet. Look at our display: 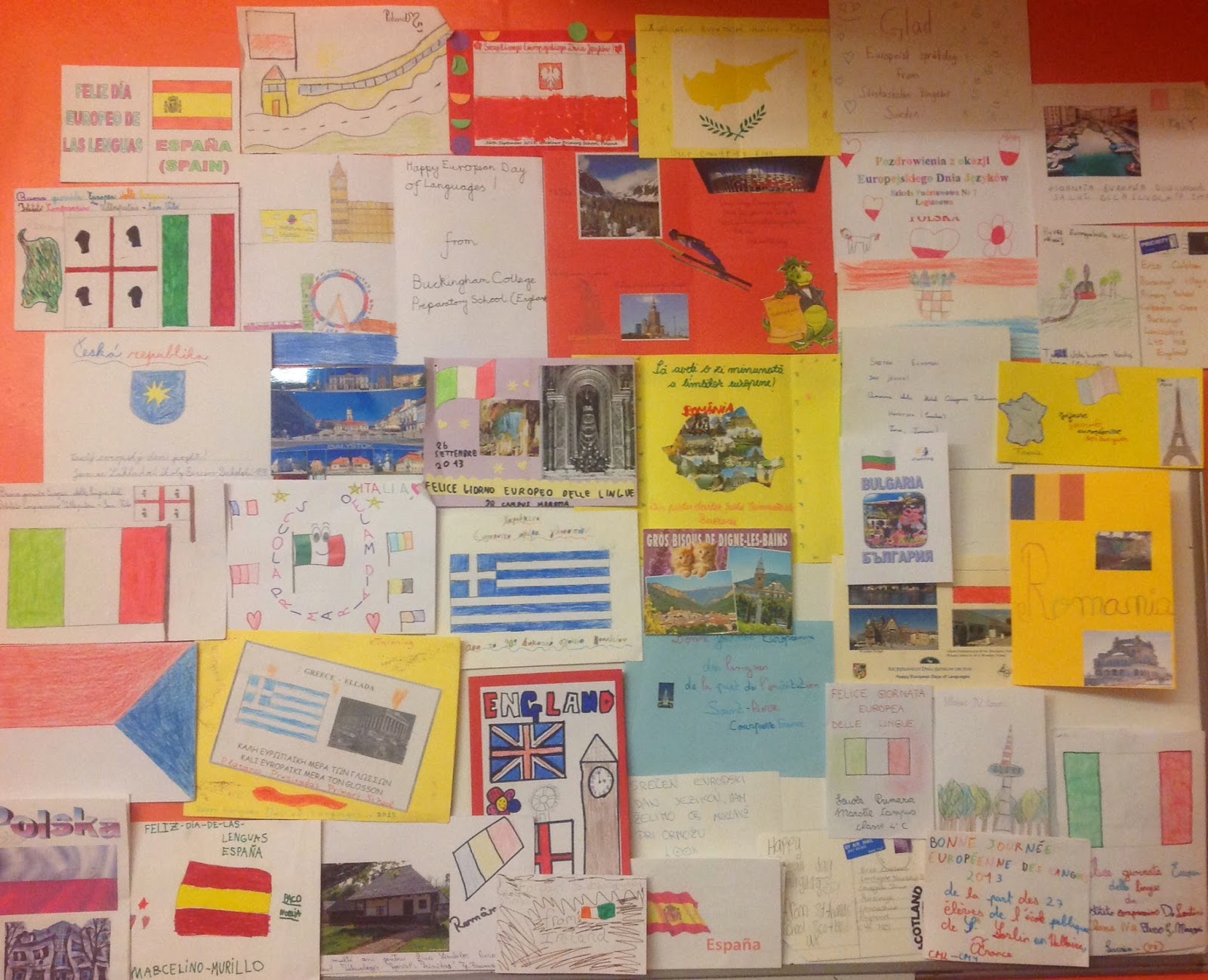 Read more about eTwinning on my blog.
2 months before: Order freebies - "Passport to the European Union" and "Languages take you further"! 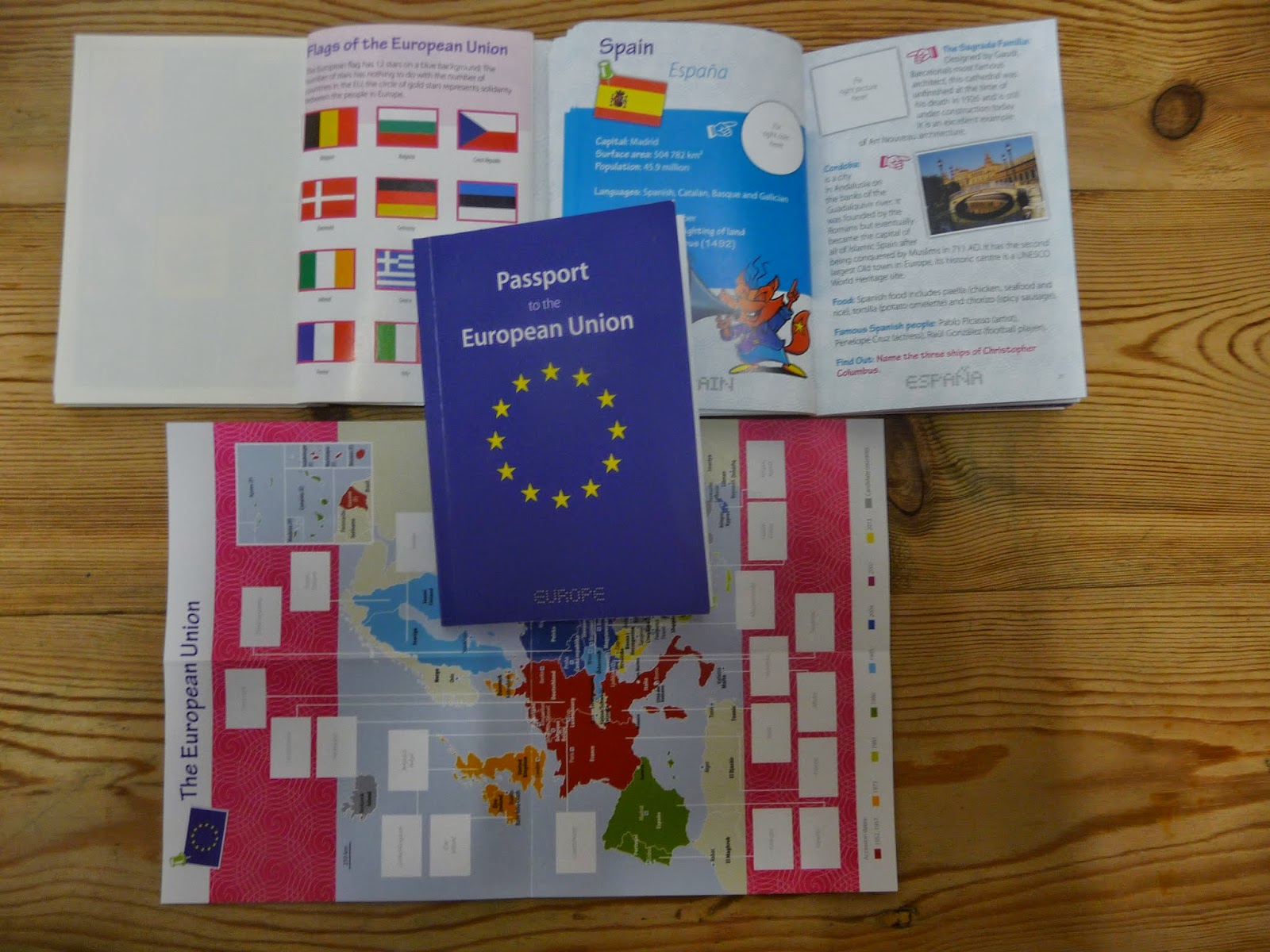 These passports are great for rewards. They describe the countries of the EU, they have stickers, and a small map.
Order them from this website! 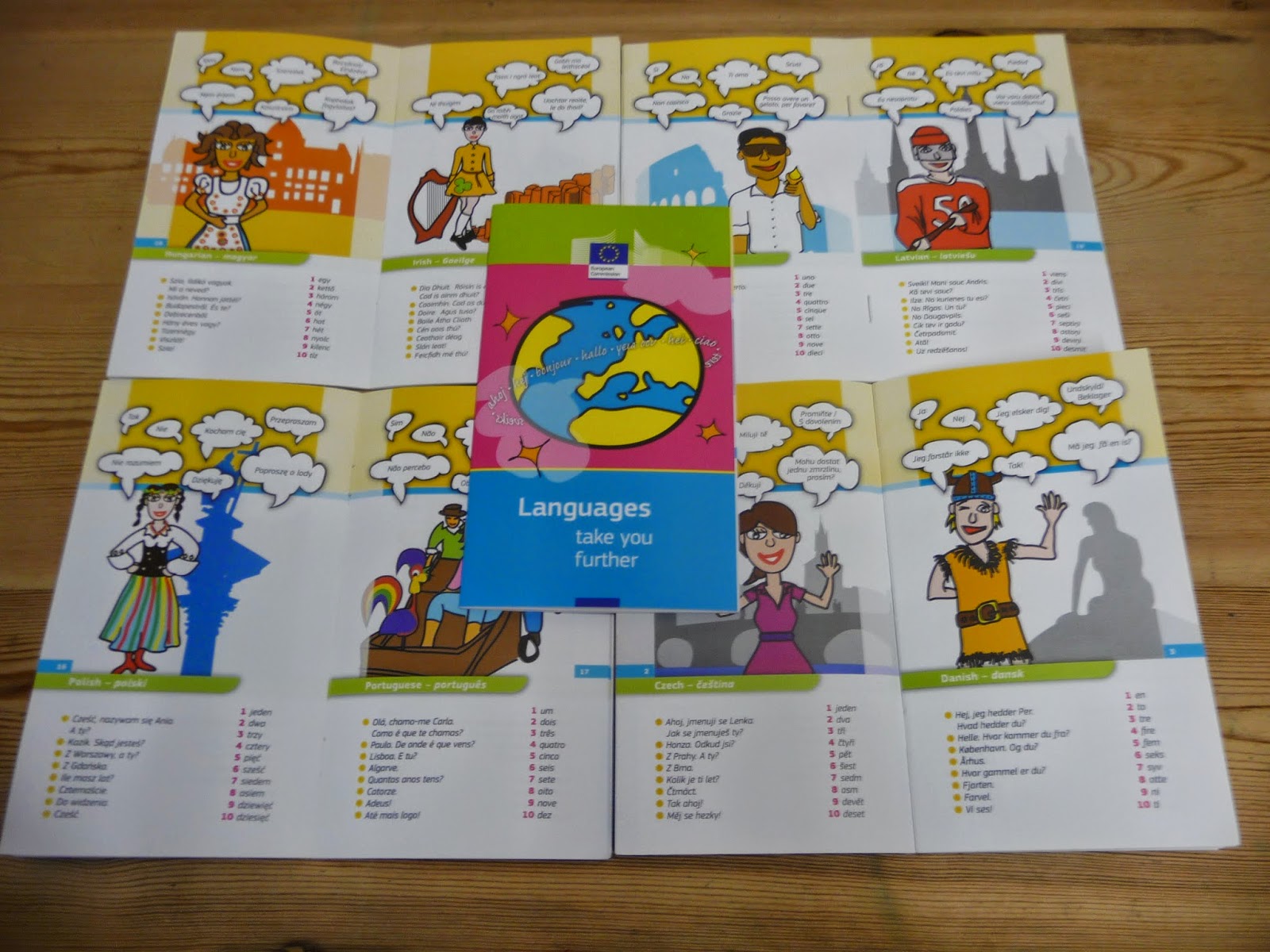 The "Languages take you further" book has a cartoon on each page, some useful expressions and numbers 1-10 . Order them from here! They are free but take a while to deliver, so get them now.
1 month before: Get the "I love languages" resource pack from Routes Into Languages. It includes posters, badges, certificates and calendars. The pack is not free but very reasonably priced.Currently these resources are unavailable, I have tweeted Routes Into Languages to ask about the stock, and will update the blog when there is an answer from them.
https://www.routesintolanguages.ac.uk/love 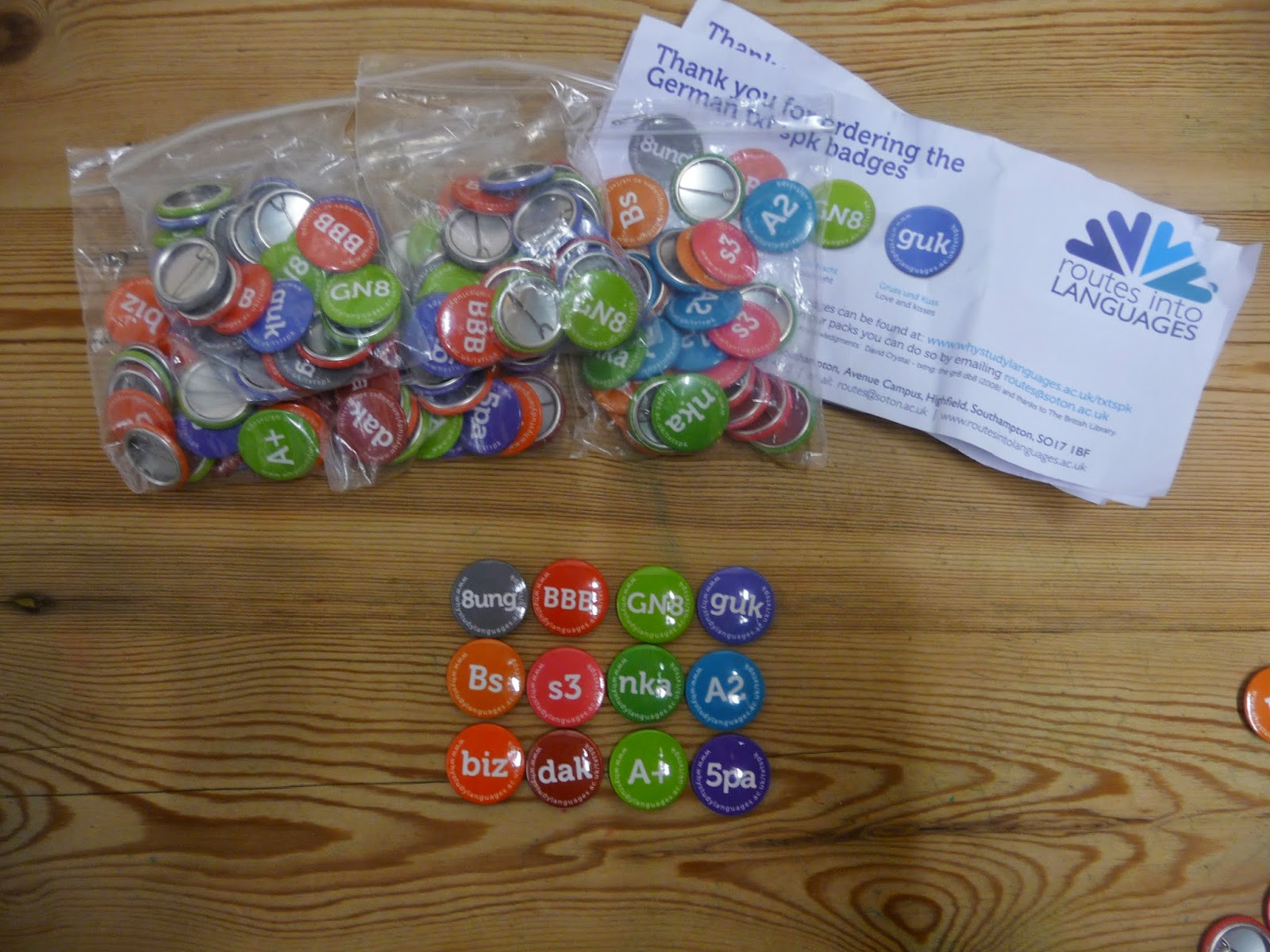 text speak badges in German, Spanish and French, can you guess what they are? 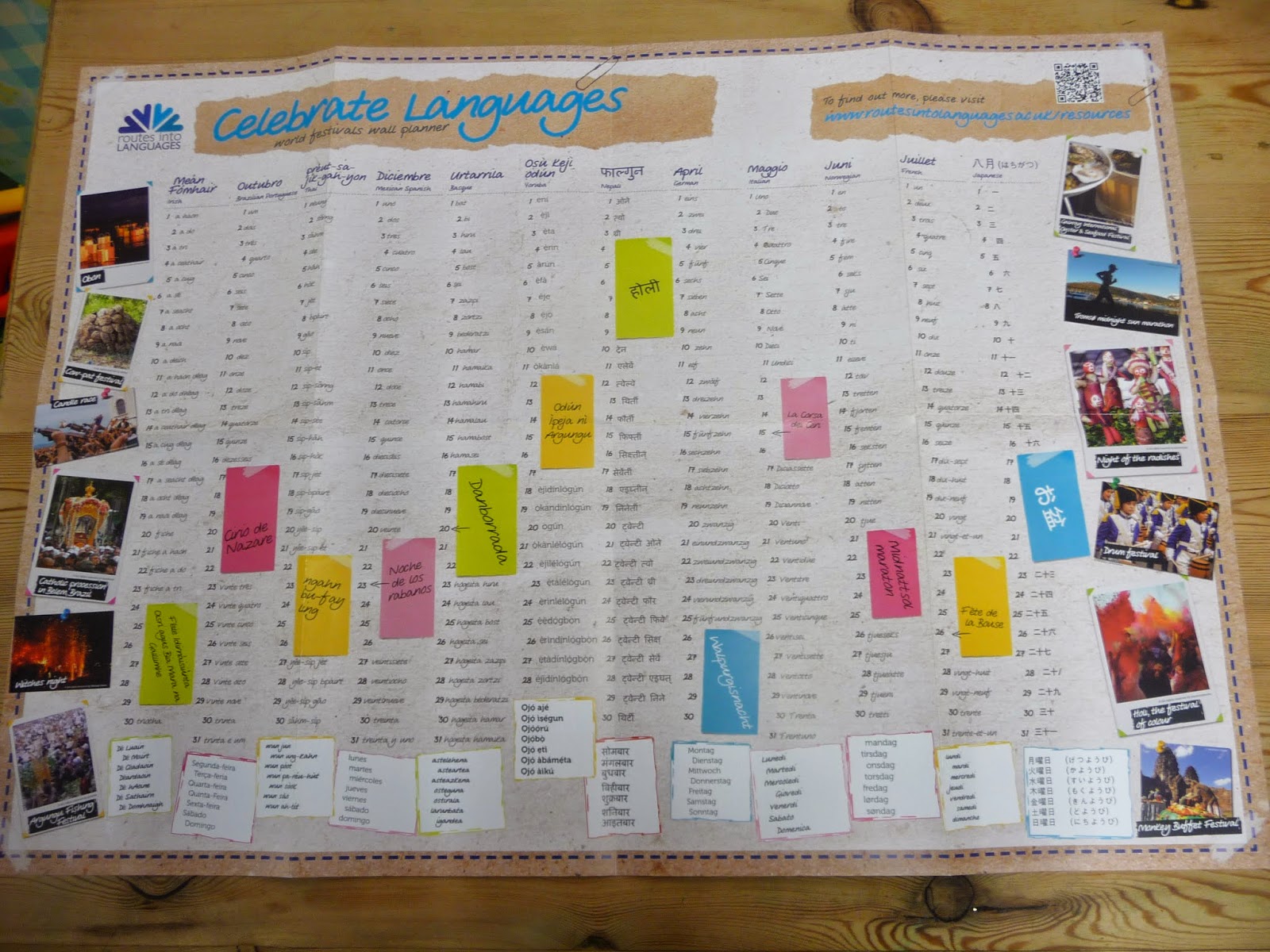 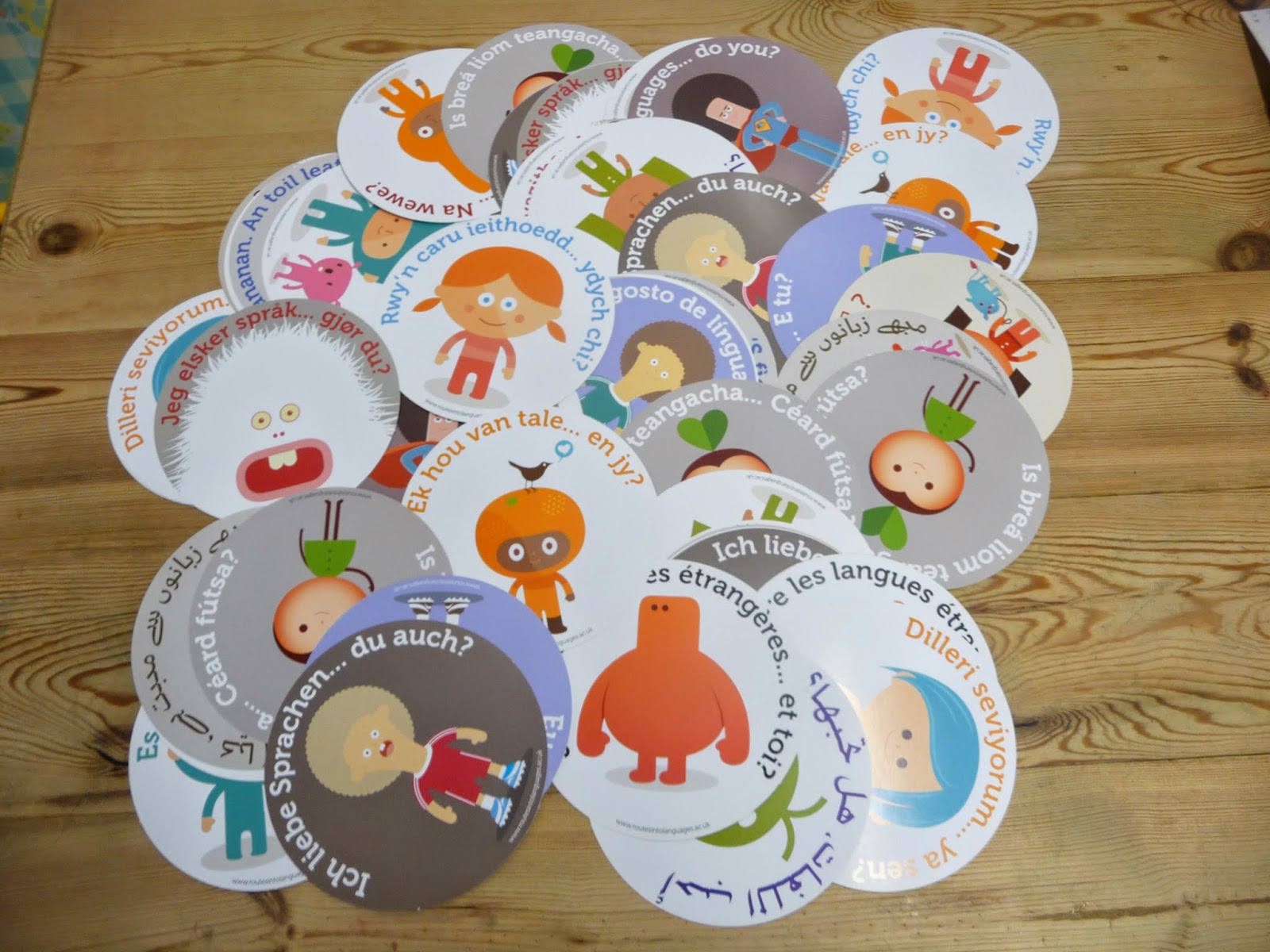 "I love languages" certificates, you can write the chid's name on the back 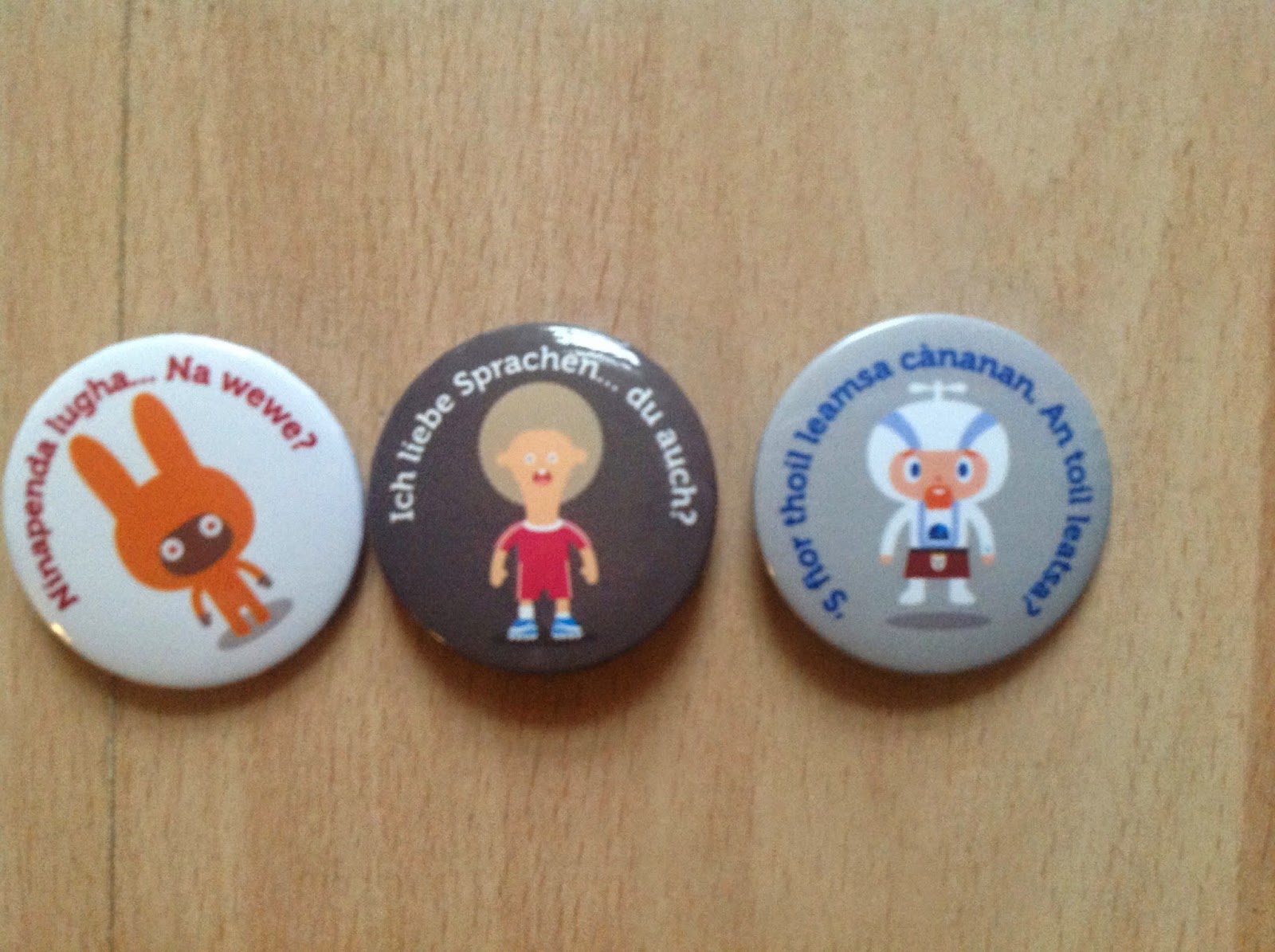 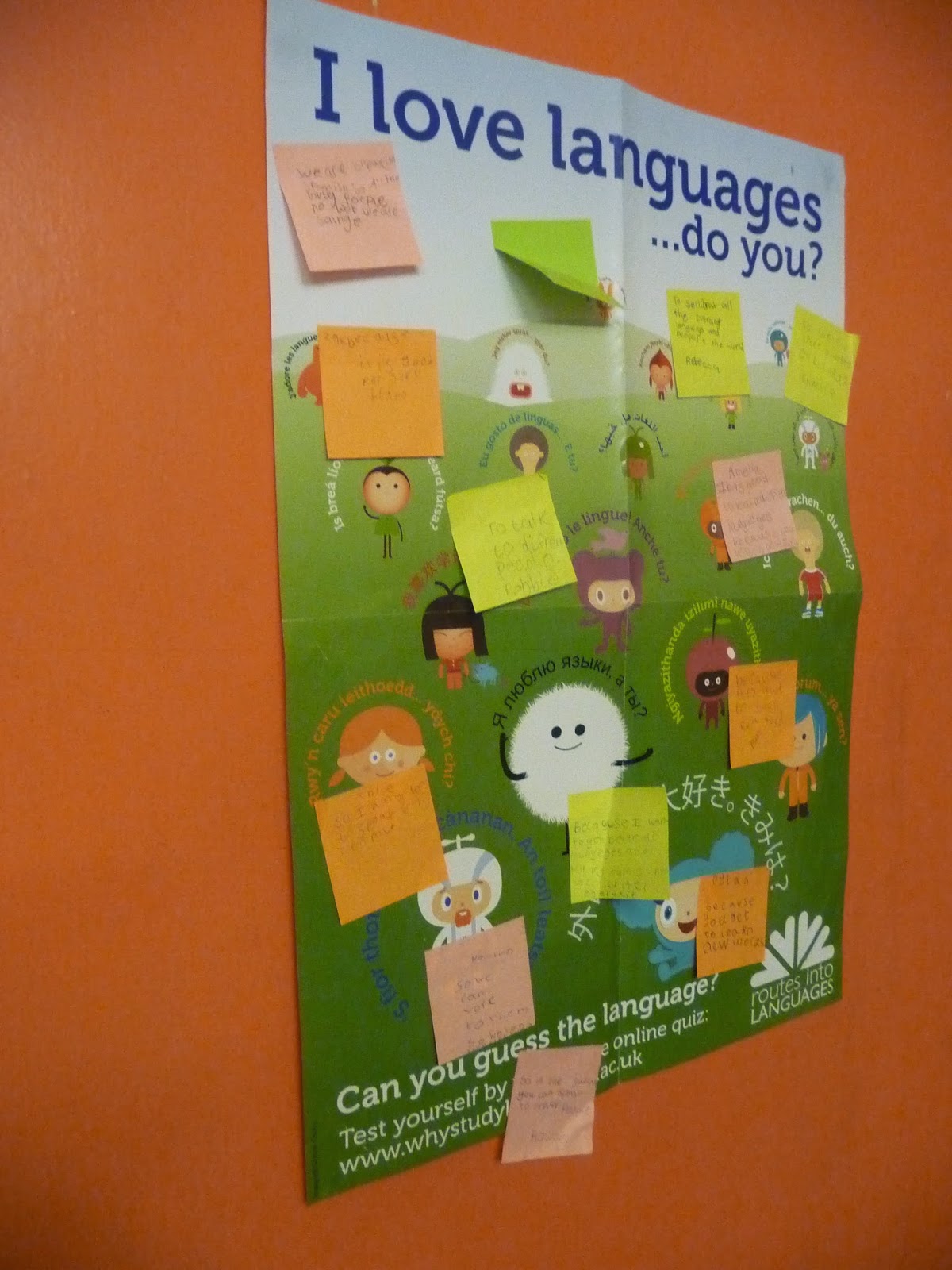 "I love languages" poster- we added why it's useful to learn a language
1 week before: Language challenge - A week before the big day I took the pages out of the "Languages take you further" book and made a display out of them for the classroom wall. I set a challenge: the pupils had to learn to count up to 5 in a foreign languages, learn to introduce themselves or say hello. They got a prize the following week if they said their words in class in front of everybody.
1 day before: Video about the importance of languages - Download this video from YouTube, no explanations needed:-). In class watch the clip and ask the children what happened! A very popular video, the pupils demand it all the time.

And download a popular Disney song in multilanguage version, I am sure Frozen will be a hit! Here I have my favourite, from Pocahontas:-)

On the day: Raid your kitchen cupboard and find food you can relate to the 5 most spoken languages. Show these in class and ask whether they can guess where they come from. 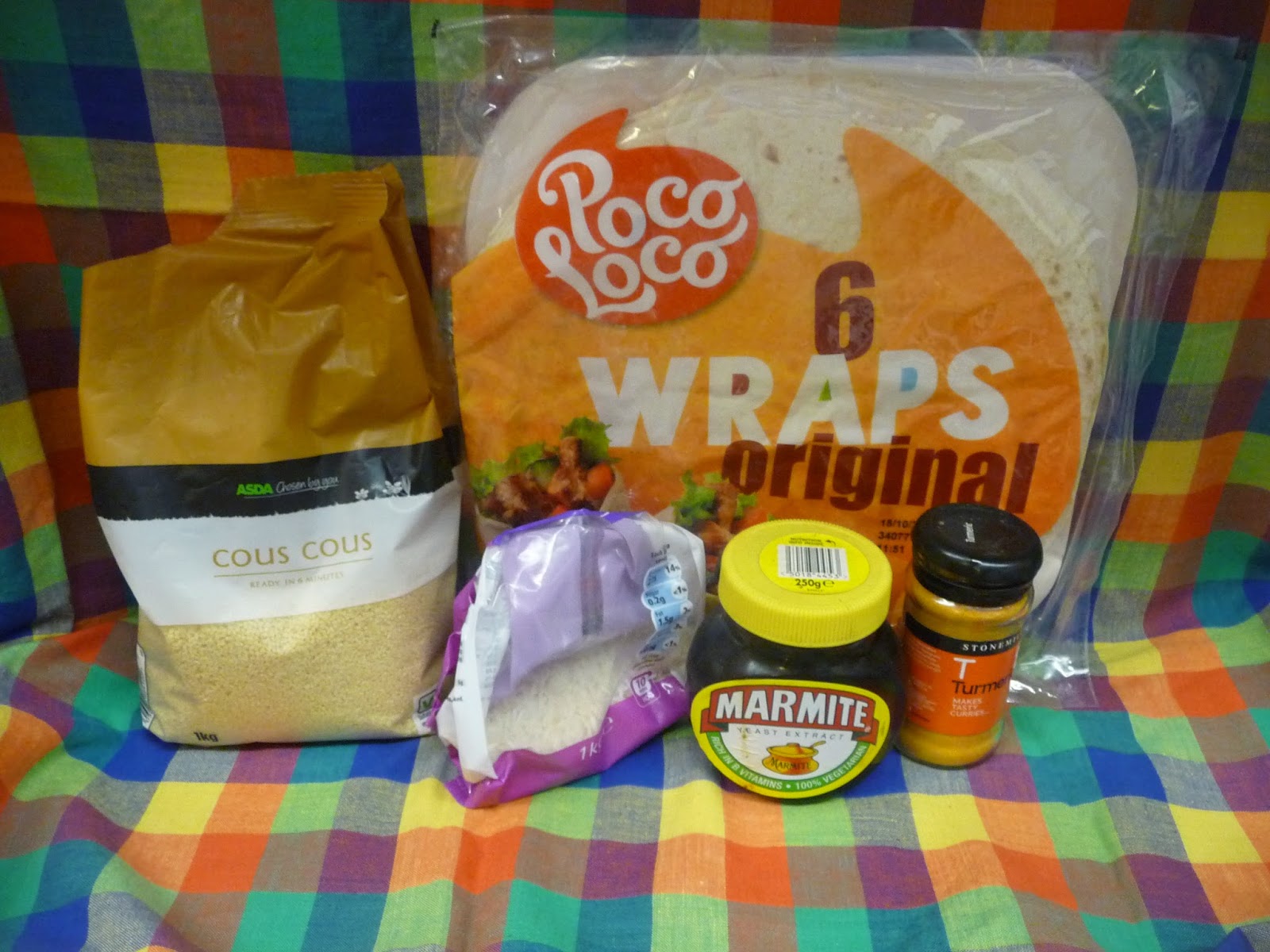 For more information and interesting facts, check out the BBC Languages page.
If you need more ideas on how to celebrate, visit the CILT EDL webpage here.


And while I was talking about prizes so much, here is a competition: Where did I take this picture? Write your answer in the comments and I will send you a badge/sticker/ or certificate! 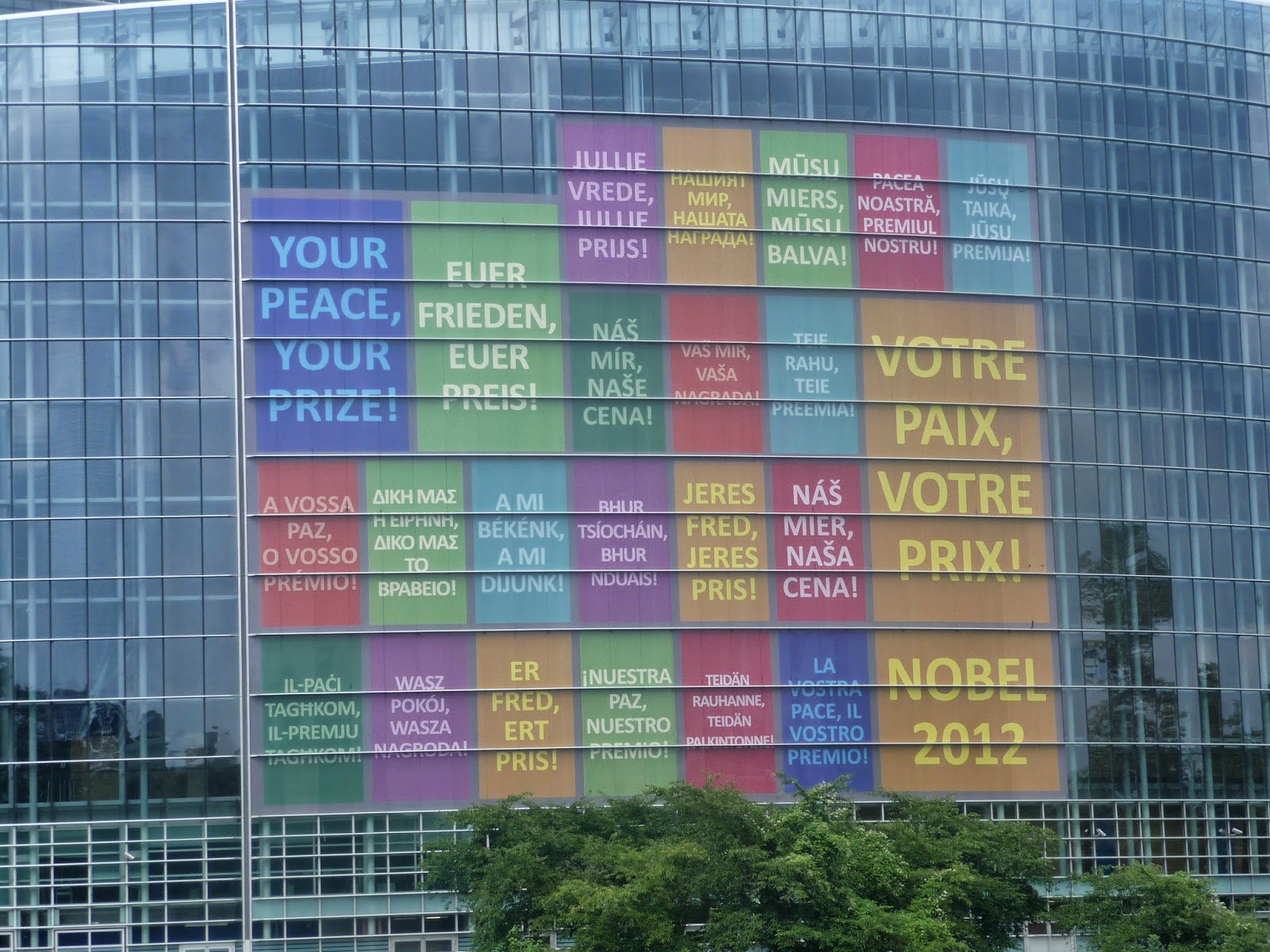