What a week....we had lots of fun celebrating the European Day of Languages! My blog post about our previous activities was very popular (click here), so I have decided to share what we did this year and you might be able to use some of the ideas next time.
Here is the list:
Food tasting:
I walked in Burscough Tesco and asked the community outreach worker (Jill) to donate some food for our international food tasting activity. I had done some research on the Tesco website before and these were the products I asked for:
Dates from Egypt- Arabic
Breadsticks- Italian
Spring rolls- Chinese
Tortilla crisps- Spanish
Poppadoms- Hindi
Pretzels- German
Croissants- French 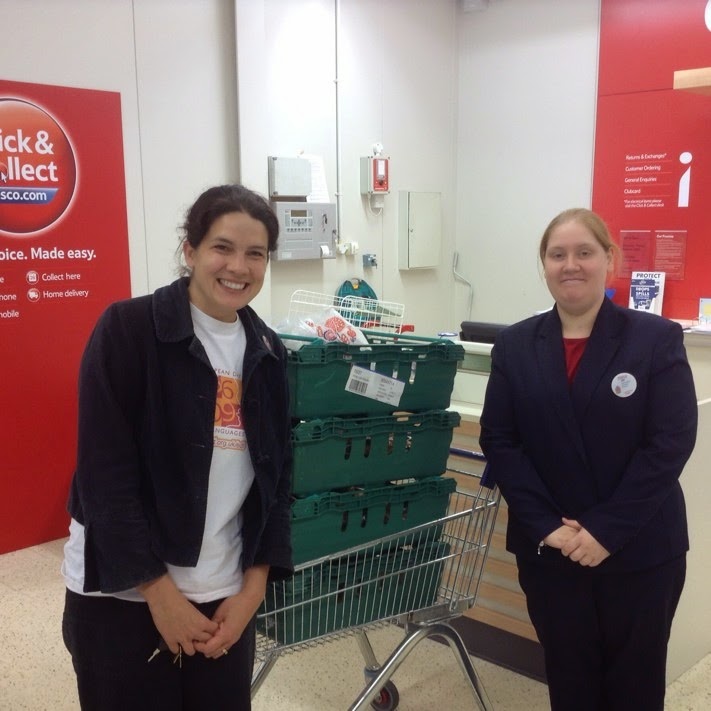 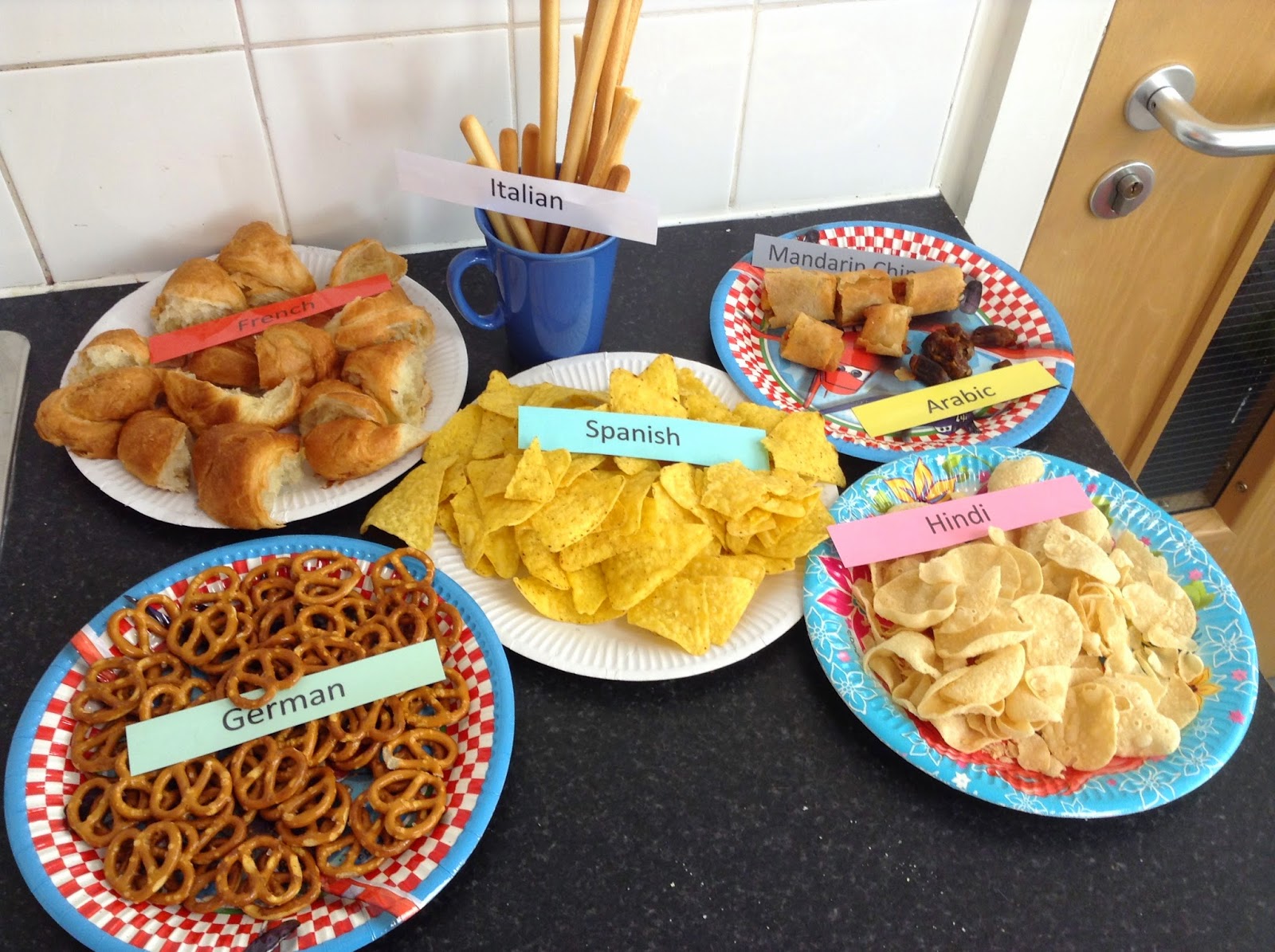 And.... I bought snails from Amazon, for those who really wanted a different experience-an idea from the Facebook Primary Languages group. Most pupils had a go, even the head teacher came in to try some and the class teachers had a small bit as well:-) 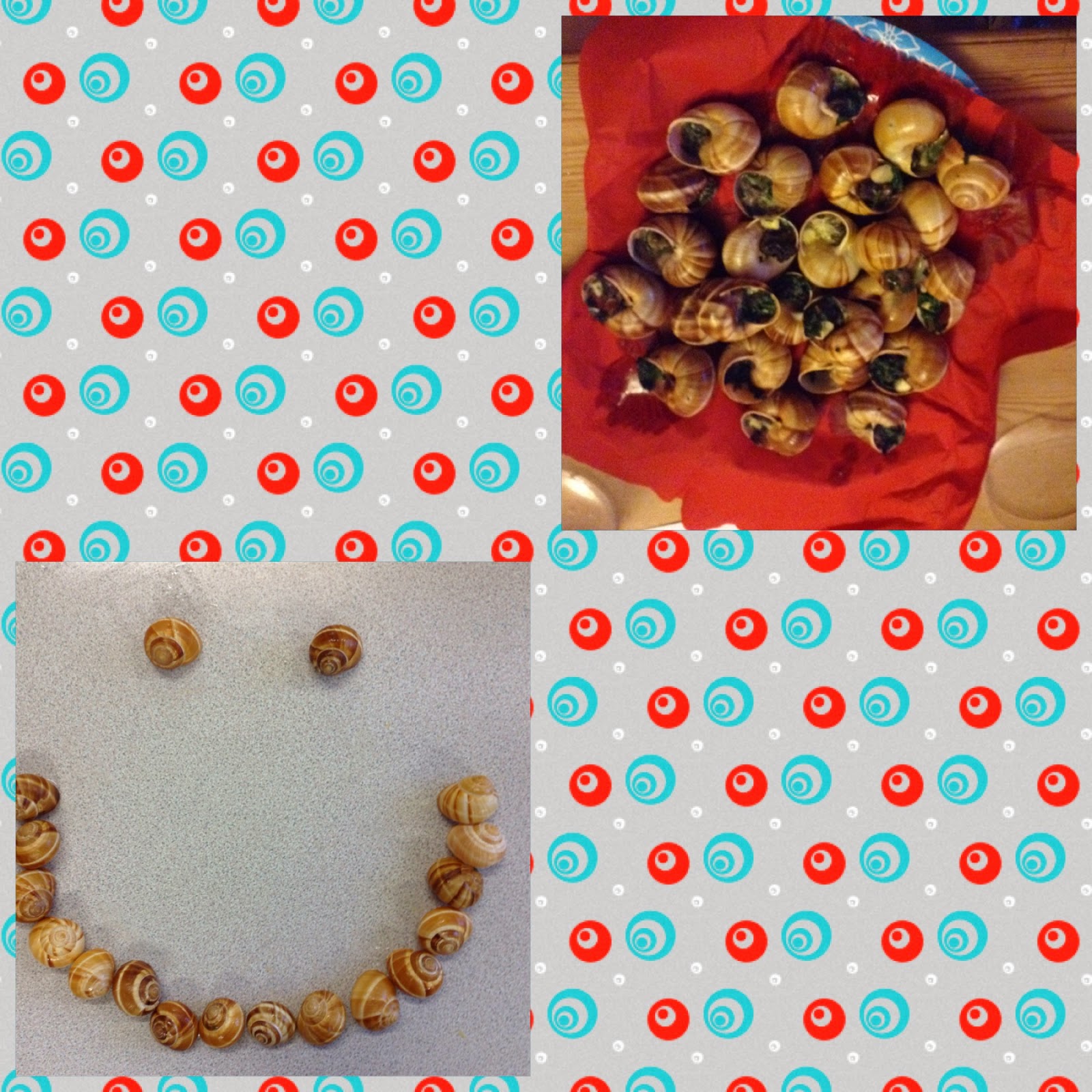 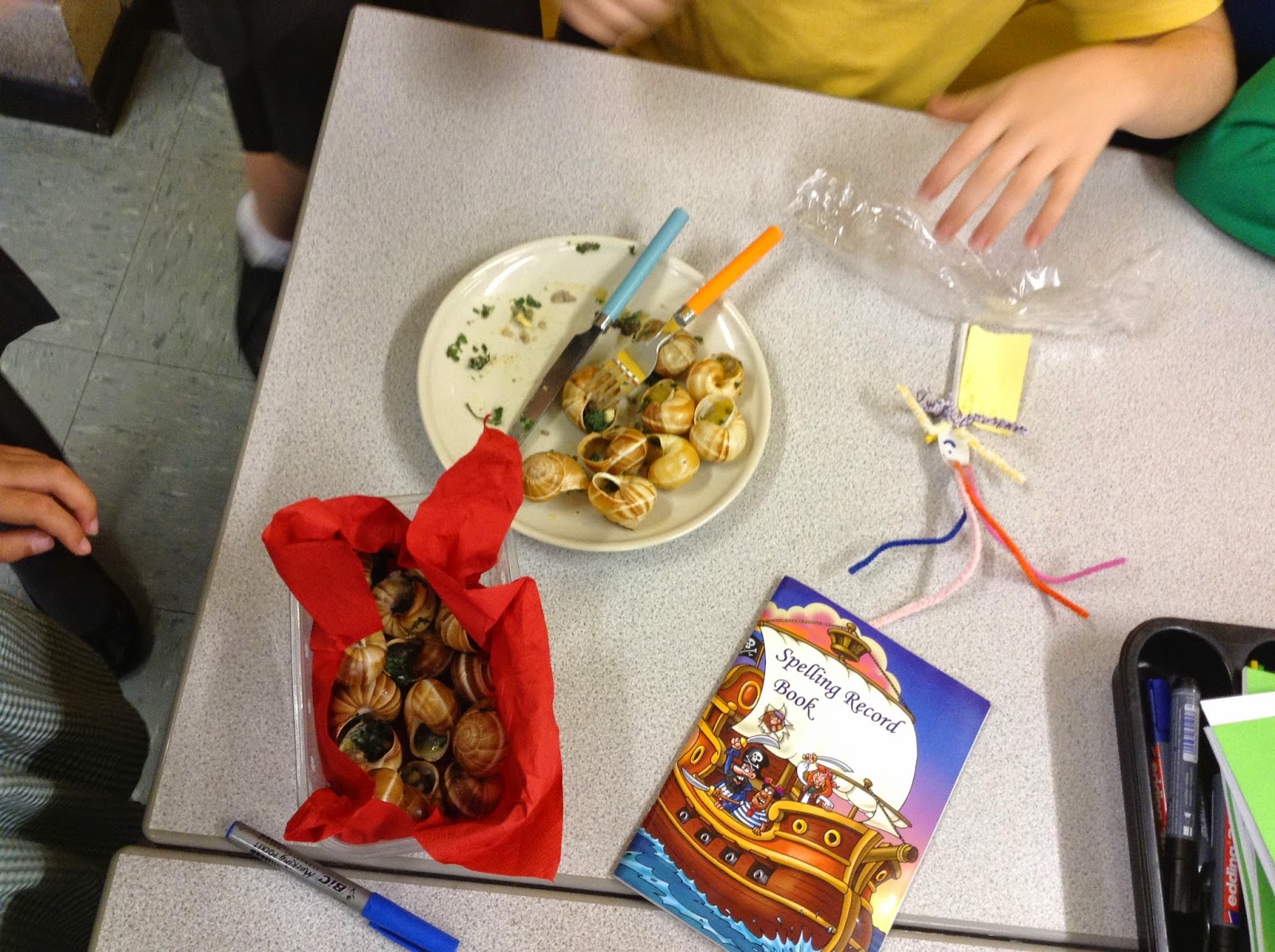 Around the world in hot air balloons:
From the book "Languages take you further" the pupils had to learn to say "hello" in 3 different languages, write them down on post its, stick them on spoon or stick men and put them in hot air balloons. The pupils made the mini men, I made the hot air balloons. This idea was inspired here http://edlideas.wikispaces.com/ (by @dominic_mcg) (The Culshaw family are sick of eating yogurts by the way:-) 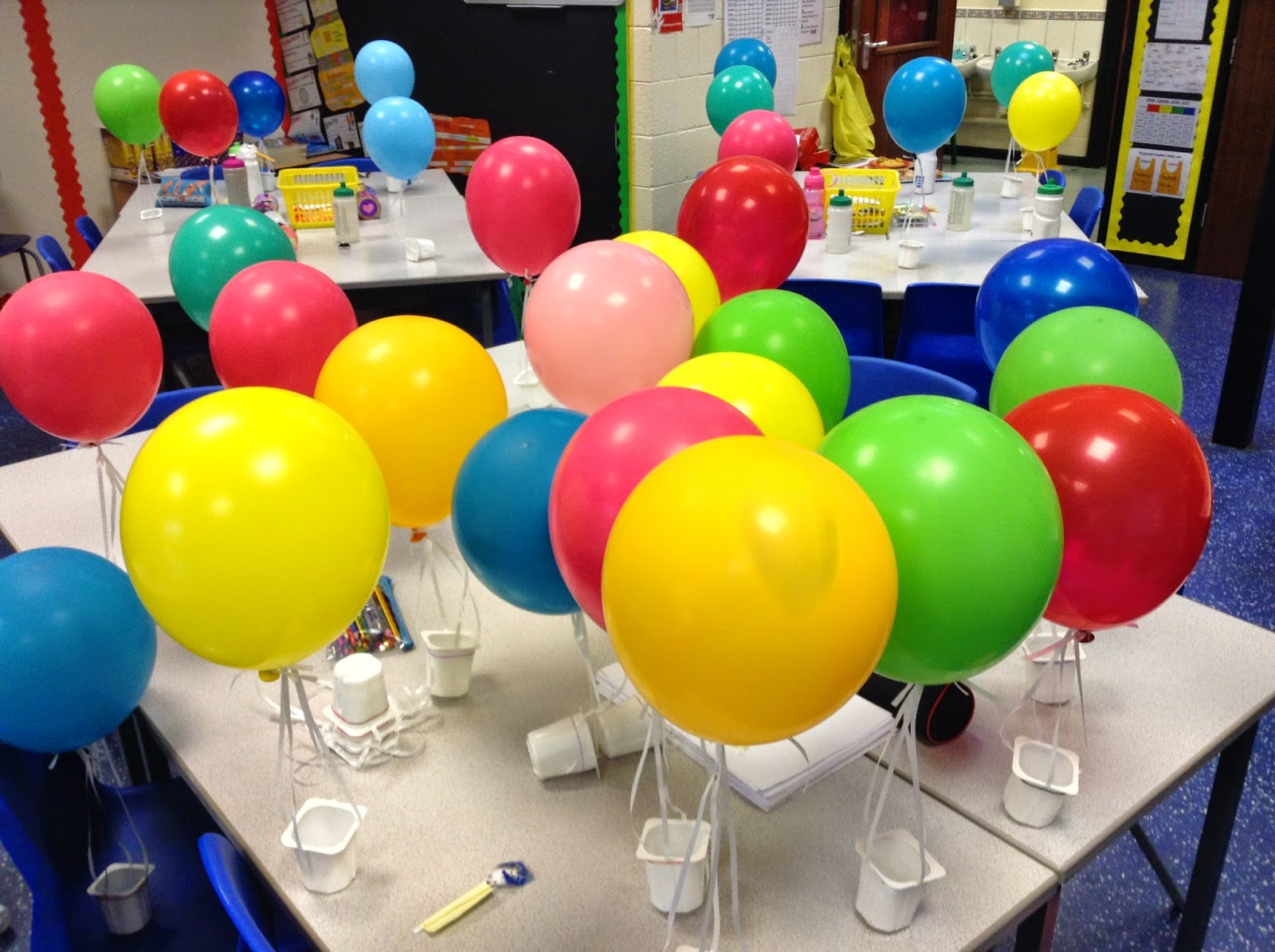 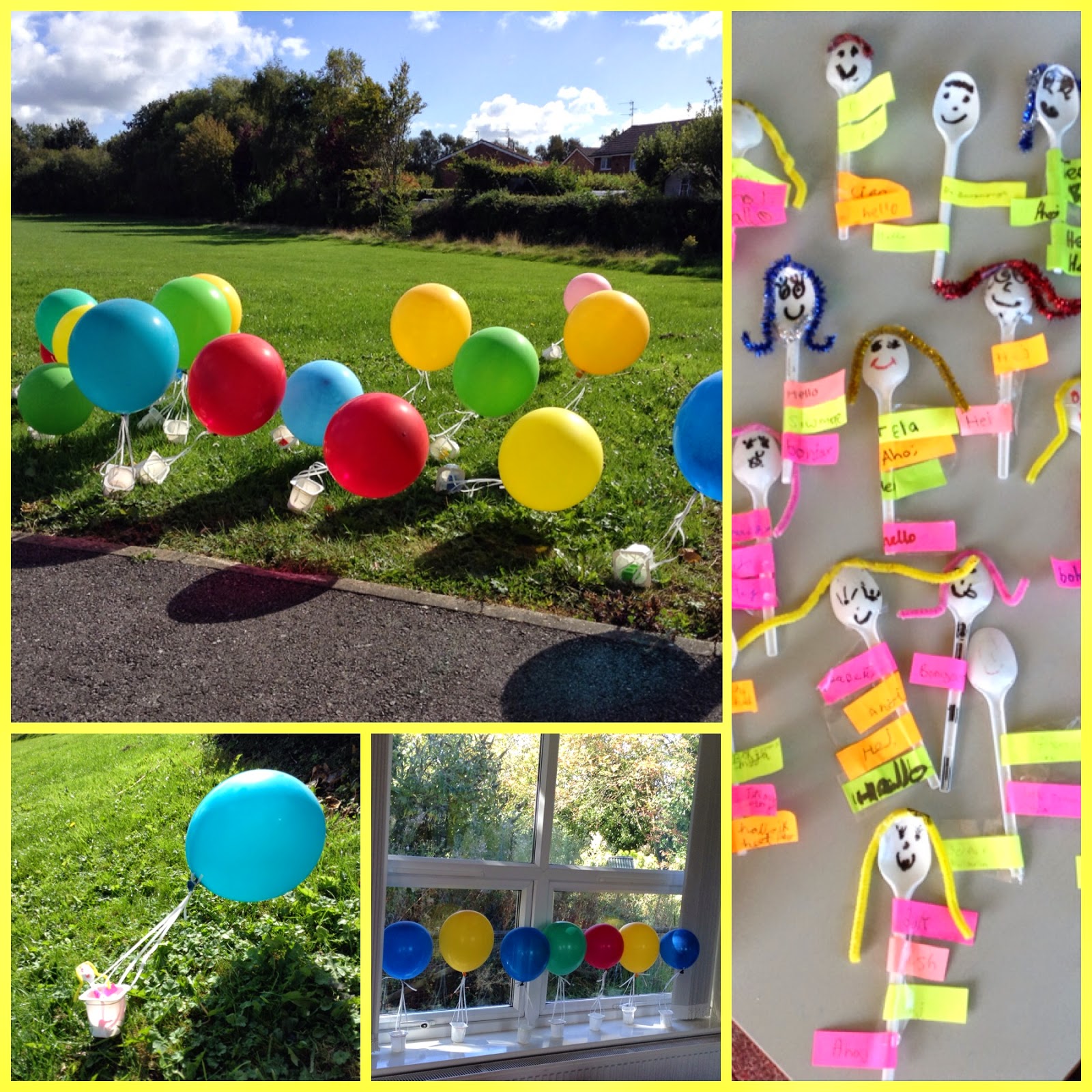 A balloon visit to another school
After making our hot air balloons, we visited St. John's Primary School and we gave them to the pupils there:-) They made us some hand made cards and stickers. Mrs Murphy, the Spanish teacher in the school prepared a fantastic assembly with all kinds of activities: singing together, learning a German tongue twister, acting out/saying the numbers in Japanese, singing a song in 3 languages, reading a story in Spanish and telling us interesting facts about languages. It was such a lovely experience!﻿ 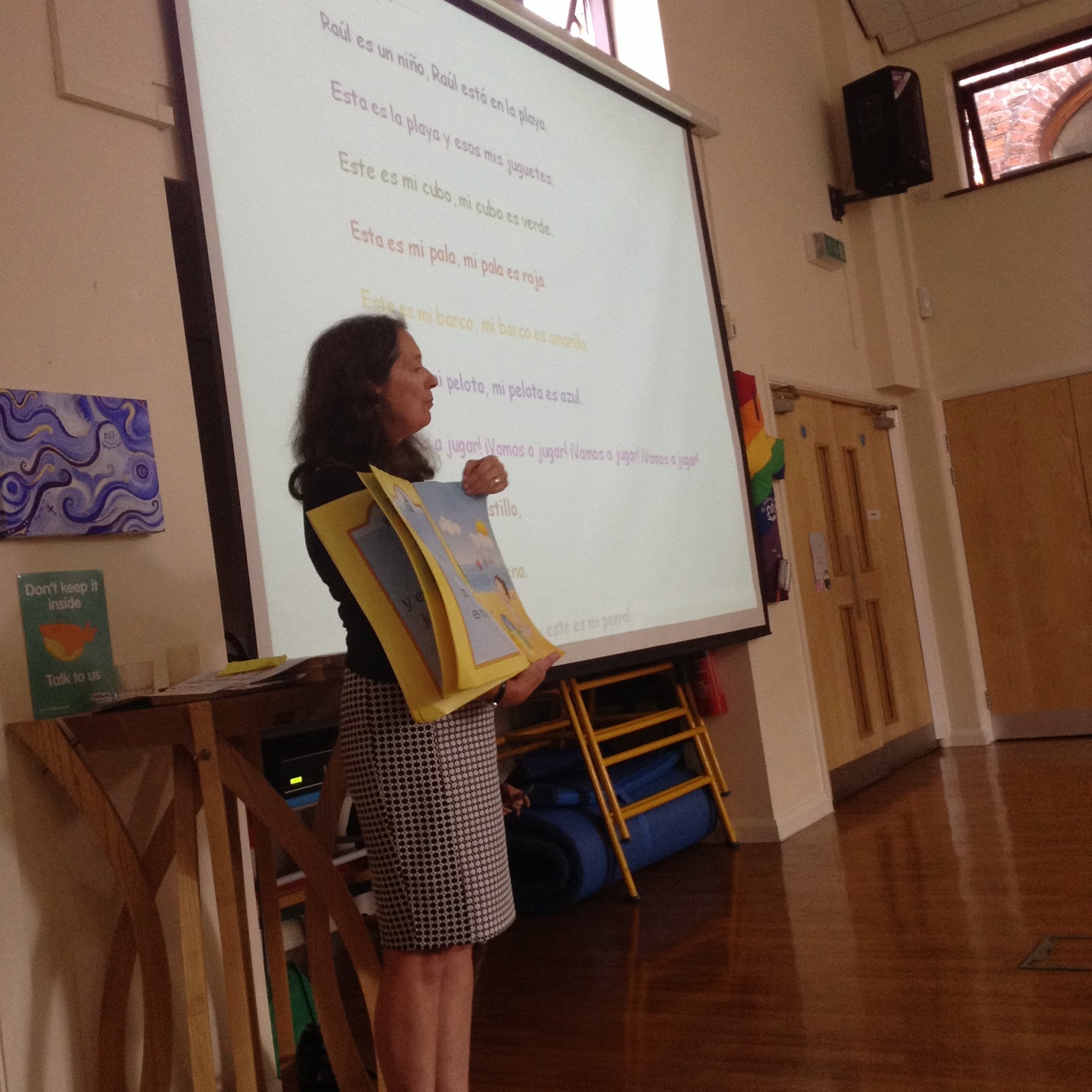 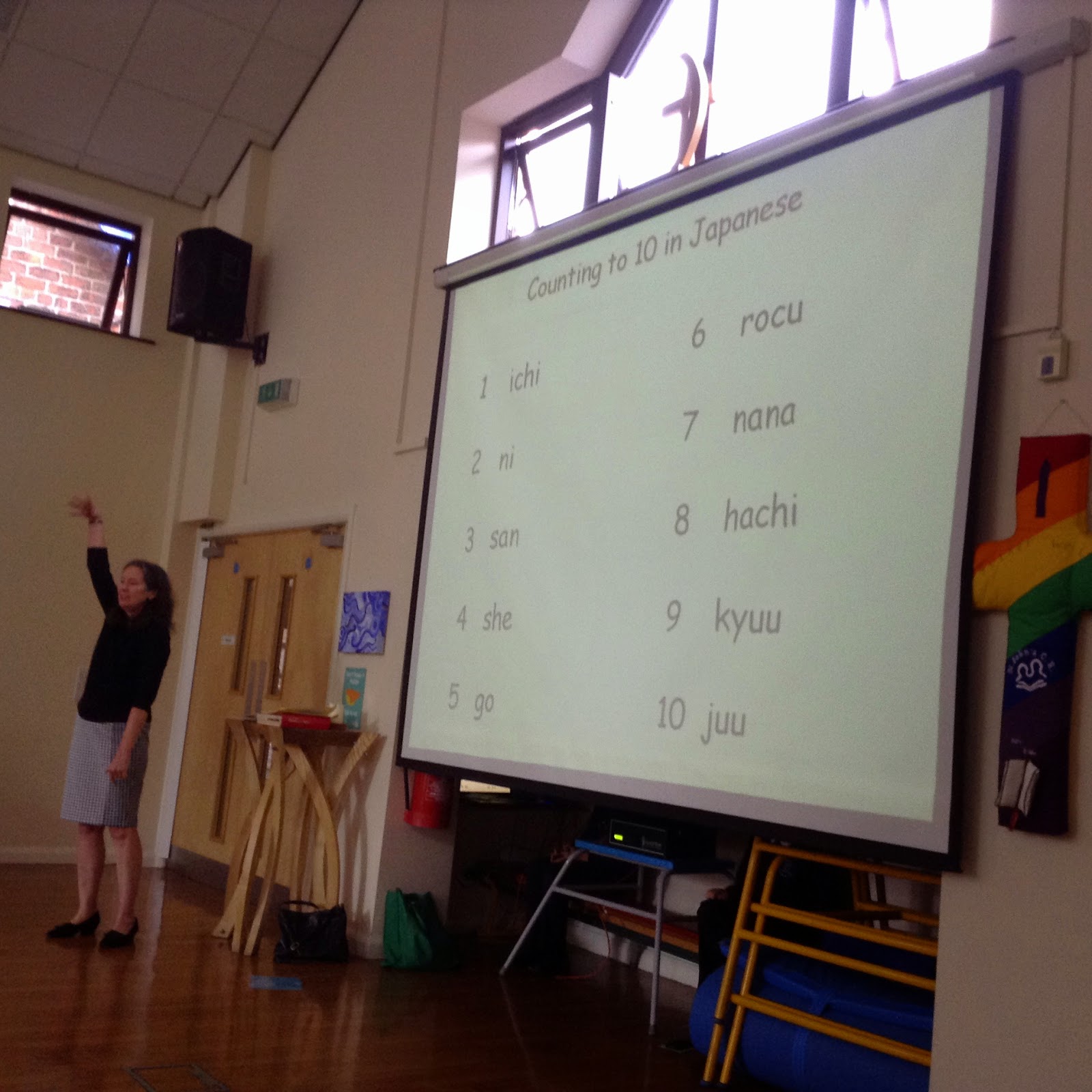 Three of my classes participated in this project: we made cards, wrote "Happy European Day of Languages!" on them and posted them to 18 schools around Europe. We are still receiving them and they look great on our display. Also, part of the project was to record/upload Frère Jacques in our own languages on the eTwinning website, it is fun to hear the song in Portuguese,Latvian, Polish, Spanish, etc... we will listen to all in the next few weeks:-) 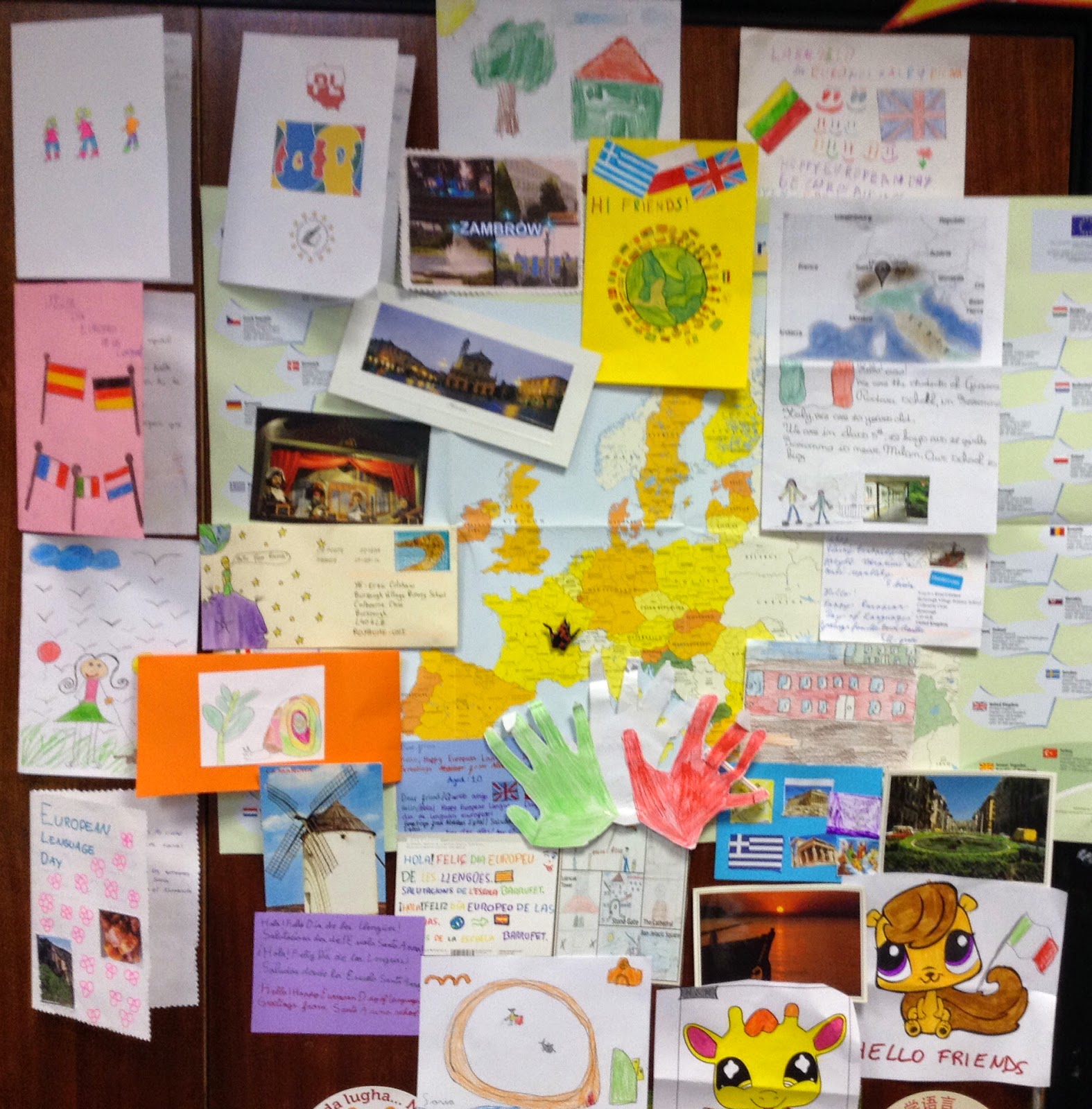 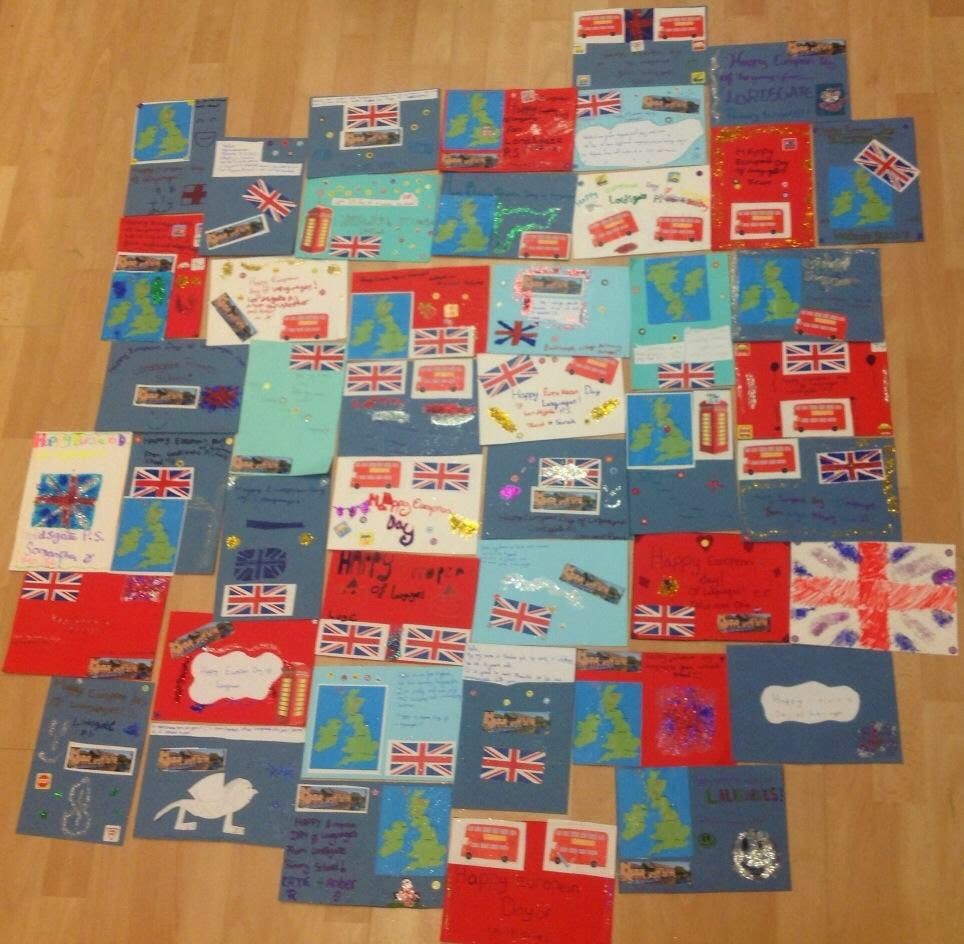 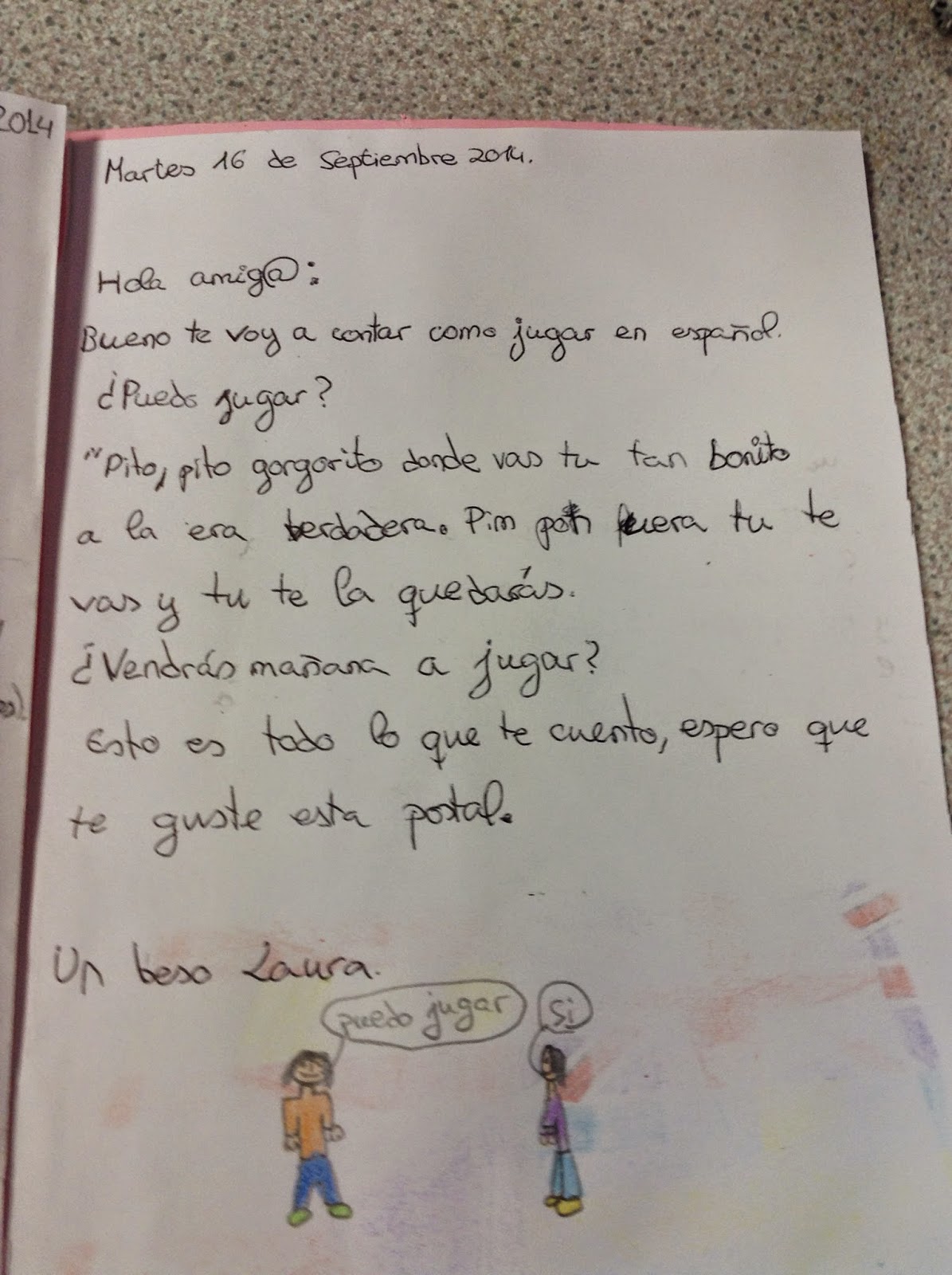 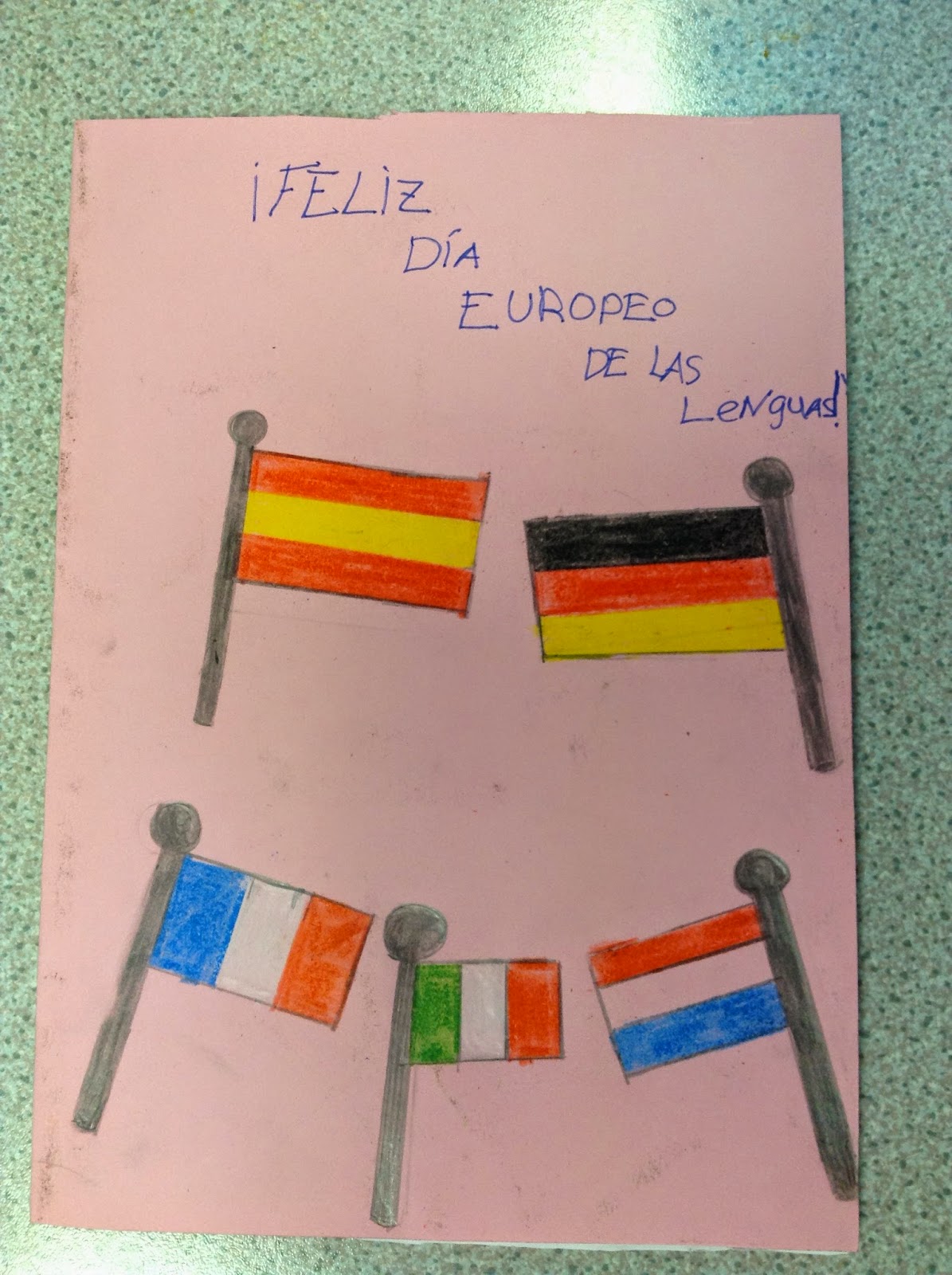 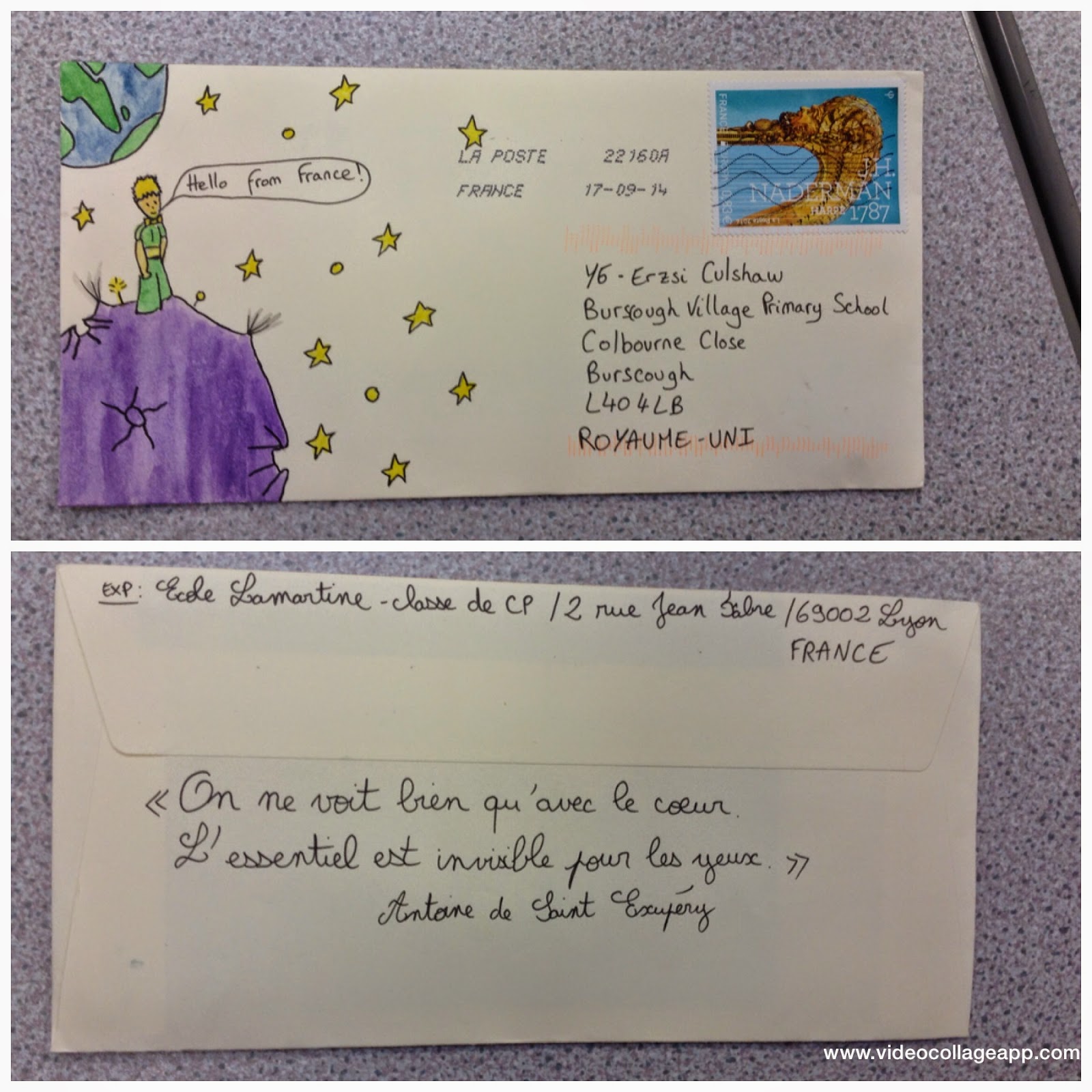 Chinese/Spanish Skype with a class in Birmingham


This was absolutely amazing! Simone Haughey (a lovely teacher I know from Twitter) and I had agreed to do a short Skype session with our classes and sing a song to each other. The test call failed before the lesson but Simone messaged to say we should try it, and it worked!:-)) Now the whole world knows that I will hardly get an Oscar for Best Director as it took me ages to work out the camera on the iPad, and quite a while to realise that the screen is showing them and not us... we were all wearing the same uniform! Simone played the ukulele and sang "Twinkle, twinkle little star" in Chinese, and my pupils repeated the lines after her! She was great!  We sang the "Cómo te llamas?" song and taught them Me llamo, Hola +Adiós.
Simone's blog is here: http://robinhoodpmfl.wordpress.com/.
My class teacher colleague wrote about this event on our school's website http://www.lordsgateschool.co.uk/year-3/. 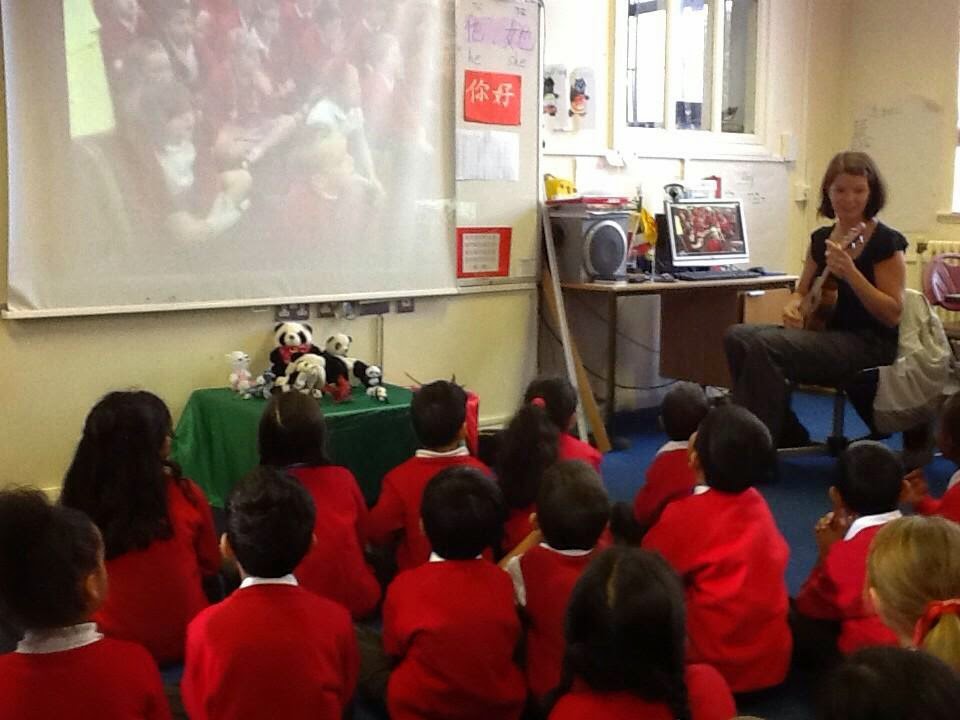 
After Simone's Skype call I thought that things couldn't get any better, but the same night I got a message on Twitter from Carmen, another Spanish teacher from Sunderland... she and her class made us a really nice video, check it out here:
http://spanishrv.blogspot.co.uk/2014/09/hay-una-cosa-que-te-quiero-decir.html They knew that we were learning about expressing likes/dislikes, so in the video they showed us some really good words on big papers and sang us a song! I was in tears after reading the post, seriously! By the way, Carmen's blog is a gold mine for language teachers, I "steal" something from it every week:-)
Prizes
Stickers, books, passports.... all freebies: you can get them through the link from my previous EDoL post. 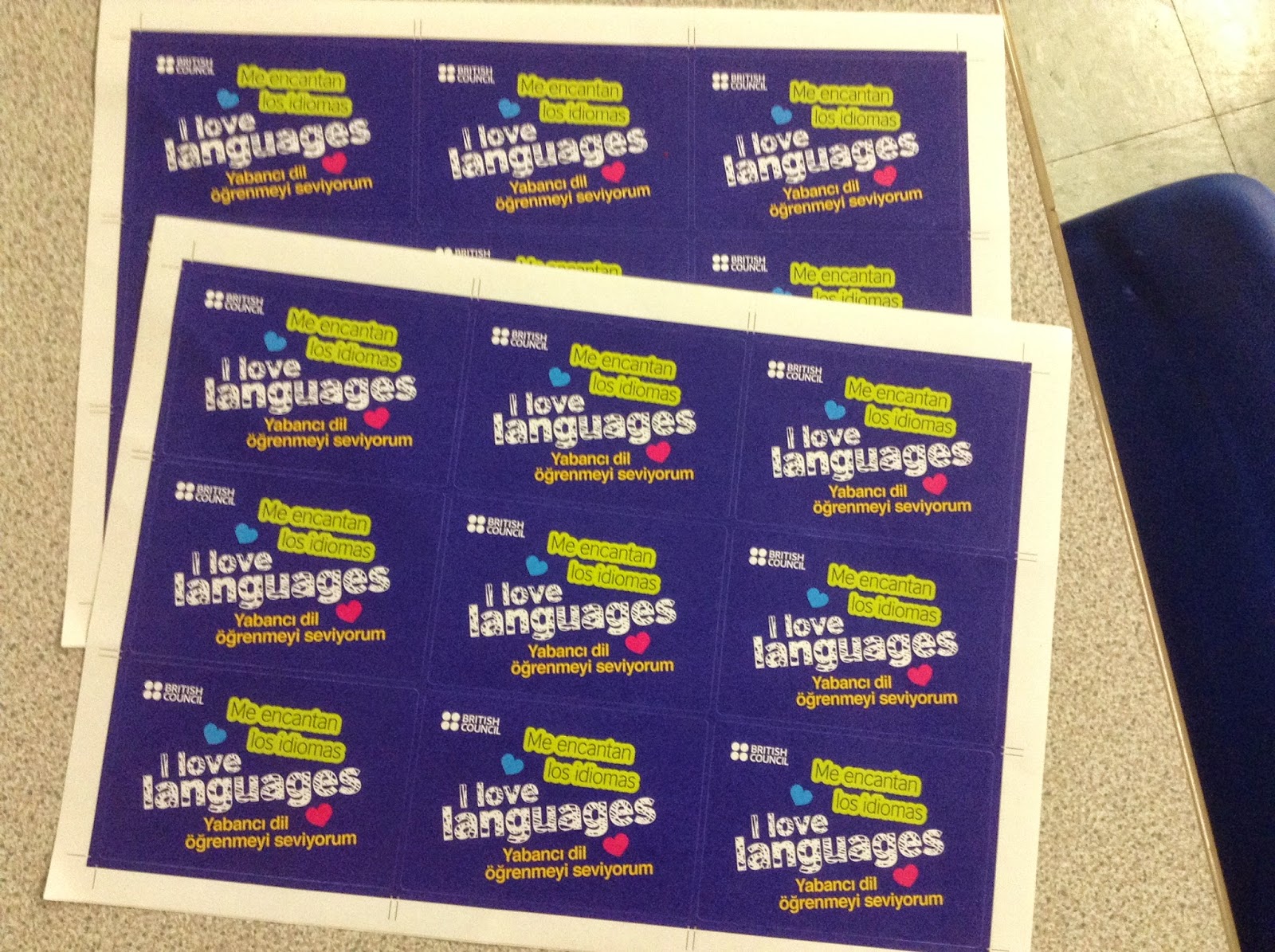 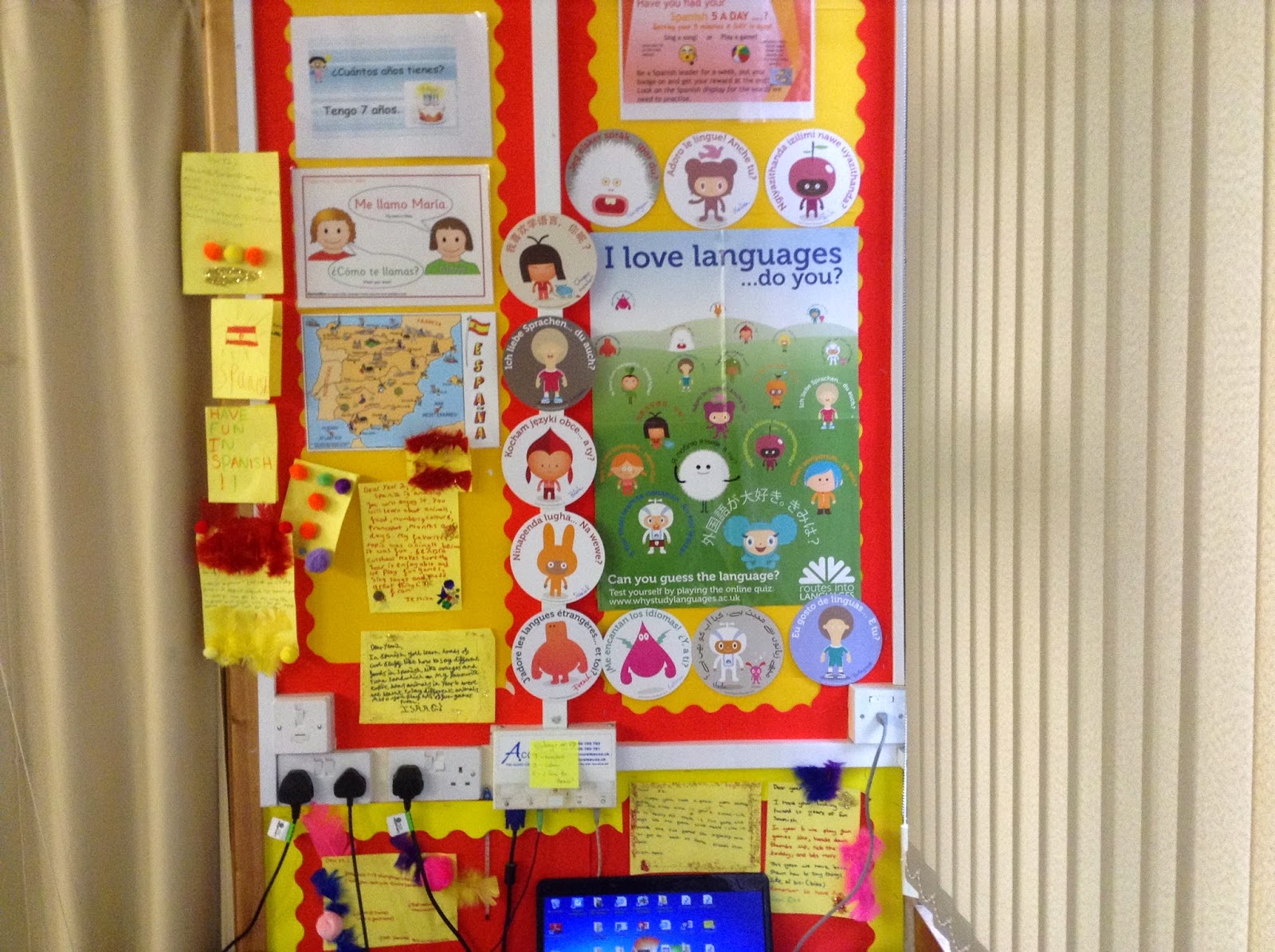 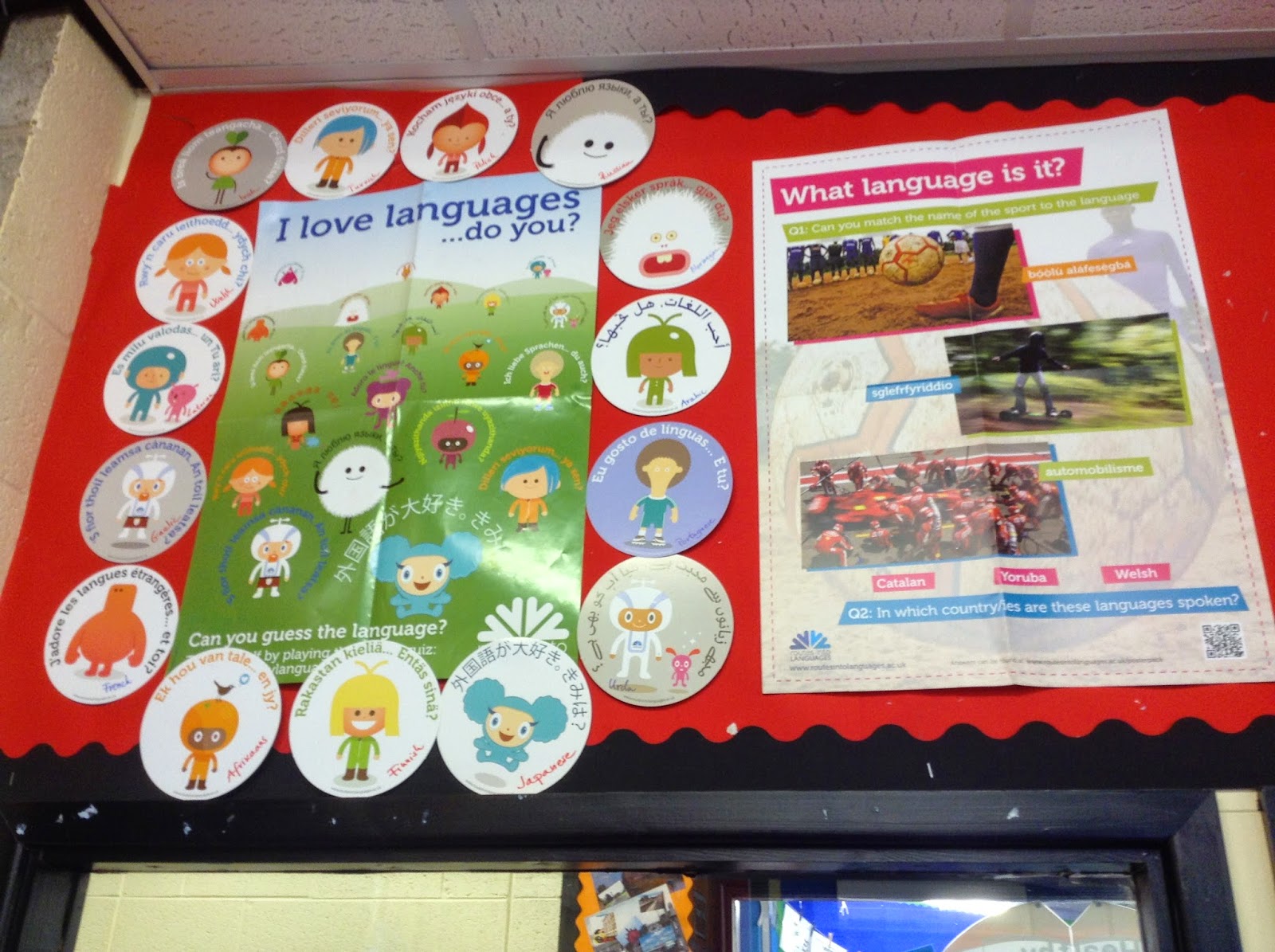 Frozen in 25 languages- it was a big hit!


Lego movie song (mulitlanguage)
It won't upload on my blog, but here is the link:
https://www.youtube.com/watch?v=r4Y8gqgItAA
﻿

So that was our week of celebration.... But there is no time to rest, we are ready for the next big event: Columbus day in a few weeks' time:-)
Posted by ErzsiCulshaw at 14:49